Despite what Hollywood would have us believe, sex isn't limited to people under age 40. In fact, recent research shows that a sizable percentage of Americans are remaining sexually active into their 70s, 80s and beyond. But let's be honest-there are obstacles, both physical and psychological, to maintaining a healthy sex life as we age.

Very good news: After years of research and clinical practice as a specialist in longevity, I have found six key principles that, taken together, can help the vast majority of couples-no matter what age-have a good sex life. And when a couple has a satisfying sex life, their feelings of fondness and intimacy can grow stronger-and that improves every aspect of their lives. For a great sex life at any age…

1. Realize that sex and intimacy can literally add years to your life. Numerous studies have shown that close relationships are a key to maintaining good mental and physical health as we get older. Of course, emotional closeness can exist without sexual intimacy-but to the degree that sexuality helps enrich our closest relationships, it can be an important contributor to a long, healthy life.

Bottom line: If you give up on a good sex life, you may die sooner.

2. Ignore what society tells us about aging and sex. The idea of older people having sex is thought of as a rarity. This stereotype couldn't be further from the truth. A study of sexual activity among older Americans, published in The New England Journal of Medicine, showed that more than one-half of men and women between the ages of 65 and 74 and more than one-quarter of those between 75 and 85 had been sexually active within the previous 12 months. And among those who reported that they were in good or excellent health, these figures were considerably higher.

Bottom line: Don't let society's false stereotype keep you from one of the great joys of life.

3. Take care of your health. A healthy blood flow to the sexual organs is essential for sexual response. That's why maintaining good cardiovascular health-including managing cholesterol levels and blood pressure as well as exercisingis key to a good sex life. Also vital…

4. Steer clear of alcohol. A character in Macbeth famously said of alcohol, "It provokes the desire, but it takes away the performance." He was right. Alcohol can make us want sex more and some women, in particular, say that their sexual pleasure is increased after drinking. most likely because alcohol reduces psychological inhibition. But even one drink can reduce a woman's vaginal blood flow and lubrication and intensity of orgasm. For men, intoxication can severely reduce the ability to achieve an erection and the intensity of orgasm-and regular alcohol consumption (even without intoxication) lowers testosterone levels, affecting quality of erection and orgasm.

Bottom line: A little alcohol might help-or at least not hurt your sex life. But it's best to save any imbibing for after sex.

5. Take advantage of medications and sex-related personal-care products. For older people, the introduction of the oral medications sildenafil citrate (Viagra), vardenafil (Levitra) and tadalafil (Cialis), which help men to maintain erections, has been an important development.

Reason: Erectile dysfunction is one of the most frequently cited reasons that older couples are no longer sexually active. While they are safe and effective for most men, talk with your doctor about potential side effects before trying any of these drugs.

What many couples don't realize: It is normal for an older man to need to have his penis physically stimulated to achieve an erection-just thinking about sex, or even kissing and other foreplay, often isn't enough. Ladies, this is not an indication of diminished desire.

As we all know, hormones play a great role in sex…

Alternative: If a lubricant isn't enough to make sex comfortable, ask your doctor about a topical form of the hormone estrogen, which can be applied to the vagina to increase your body's ability to lubricate itself.

6. Keep all the flames burning. If you're in a long-term relationship and you want a satisfying sex life, it's important to purposely set aside time for nonsexual intimacy on a regular basis. Perfect example: Years ago, I lived next door to a couple who had a weekly candlelight dinner in their backyard. This kind of intimate encounter may not always lead to sex-but it creates a psychological closeness that encourages physical intimacy.

If You Are Single, Divorced, Widowed…

For older unmarried people, finding an ap propriate sexual (and life) partner is a challenge.

This is especially true for older women, whose longer life span means they outnumber older men by about two to one.

But remember: The loss of a sexual partner wouldn't stop a 30-year-old from seeking a new relationship, so why should it stop you at age 60, 70, 80 or older?

To find a wonderful partner: The key is to frequently participate in activities that will expose you to potential partners, especially activities in which you have a strong interest, such as dancing, politics or art. This will give you the best chance of meeting someone you're attracted to and who shares your interests, an ideal starting place for developing a more intimate bond.

In a study of 1,373 men, those who drank wine-on average, less than one-half glass daily-lived an average of five years longer than alcohol abstainers and two-and-a-half years longer than beer and spirits drinkers.

Theory: Wine's cardiovascular benefits may account for the added longevity. More research is needed to assess whether these findings would also apply to women. 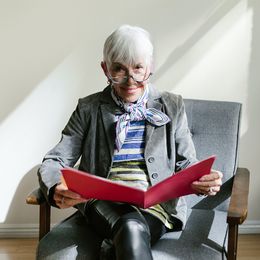 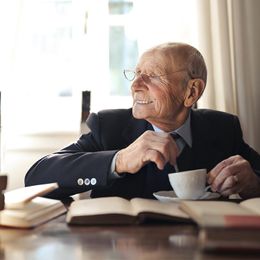