A study that followed recently unemployed people for five months—or until they landed a new job-found that staying positive and being persistent helped people find work sooner.

"It's very, very tough," said study coauthor Ruth Kanfer, PhD, professor of psychology at the Georgia Institute of Technology. "It's not like learning a skill, where maintaining a positive attitude can be easier as you see improvement with your effort. You submit resumes, but get almost no feedback on how you're doing or what you could do to improve your chances of finding a job."

Study participants had not been fired or quit, but were laid off, downsized or otherwise let go. All received Minnesota unemployment benefits, were between the ages of 25 and 50, and had at least a bachelor's degree. Most were caucasian. Sixty percent had recently lost professional, technical or managerial jobs—the rest were in clerical, sales or other fields.

On average, participants put in 17 hours searching for a job each week, but that dipped to 14 hours toward the study's end. Mental health gradually rose, and then declined slightly with a final uptick.

Weekly online assessments of participants uncovered either an approach attitude—striving for personal growth, developing skills and energetically pursuing goals—or one of avoidance."

"Avoiders" had a more defensive posture and were most concerned with avoiding failure and emotional disruption. They were also more sensitive to criticism.

Dr. Kanfer said self-defeating thinking includes: "I can't do this," "I'm not likely to find a job," "I keep getting no's," "No leads." Job seekers should not allow those thoughts to dominate, she said.

Not surprisingly, those with a positive, gogetter outlook did better than those who were more fearful and anxious. But personality traits were secondary to self-management in terms of success. From week to week, those who did the most to develop routines, seek support and keep self-defeating thoughts in check were those who put in the most hours on their search.

The findings are published in the Academy of Management Journal.

Eva Parsons is an executive coach. "Over the years, especially in the last few years, I have talked to quite a few executives who have been laid off or downsized in an organization," she said.

Parsons recalled one client: "He was a senior executive in a global company and he was laid off. He went right to work and said, 'I'm approaching this as if this is my job now.' He was at his desk every day and he had a list of things he wanted to accomplish. Mostly networking initially, but also revisiting his resume or his CV and making sure that everything was current."

Parsons said job seekers "have to do the usual things that people do to stay healthy and to keep their spirits up: eat properly, get enough sleep, exercise, all the things you normally do to manage stress."

She added, "When they feel like they've been hit in the gut and they've gotten this sort of bad news—a lot of people's initial reaction is to want to curl up and go hide in the corner.

"People need to do the opposite-Reach out to friends. Keep making that part of the discipline."

If a job search drags on, Parsons recommended finding or starting a support group, “so that you can have other people to share your strategy with and touch base with on a weekly or biweekly basis, and compare notes and keep each other motivated. If it’s too solitary a process, it can be really hard for people.”

Do Men Think About Sex All the Time? Maybe Not

Working Too Much Can Give You the Blues 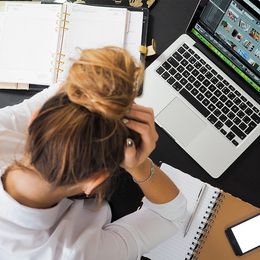