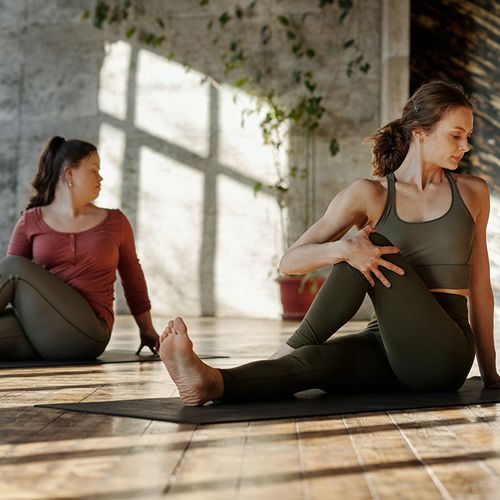 In a small preliminary study, practicing yoga appeared to halve the number of episodes of a potentially dangerous irregular heartbeat known as atrial fibrillation.

Three sessions of yoga a week also improved quality of life, lowering levels of the anxiety and depression that often plagues patients with this condition, according to research presented at the annual meeting of the American College of Cardiology in New Orleans.

Prior research had shown other heart benefits of yoga, such as lower blood pressure and cholesterol and more elastic arteries, but this is the first study looking specifically at atrial fibrillation, said the authors, from the University of Kansas Hospital.

Atrial fibrillation, which affects millions of older Americans, is an irregular heartbeat that greatly raises odds for blood clots and stroke.

Treatments tend to be either invasive procedures or medications that carry side effects. Some lifestyle tactics are also helpful, such as moderating alcohol and caffeine to reduce triggers, said Raul Mitrani, MD, director of the cardiac rhythm device clinic at the University of Miami Miller School of Medicine.

In the new trial, 49 patients between the ages of 25 and 70 who had atrial fibrillation participated in a 45-minute supervised yoga class three times a week for three months. Sessions involved breathing exercises, various positions (asanas), meditation and relaxation. The participants were also given an educational DVD and encouraged to practice daily at home.

"Advanced yogis for a long time have disproven the idea that heart rate is automatically determined by physiological need," noted Scott Shurmur, MD, director of preventive cardiology at the University of Nebraska Medical Center in Omaha. "We know that meditation, yoga etc., really do provide some conscious altering of the sympathetic and parasympathetic nervous systems. This is the first time I've seen results on atrial fibrillation."

"Absolutely, yoga can play a role in the management of atrial fibrillation," says Louis Evan Teichholz, MD, medical director of cardiac services and of the complementary medicine program at Hackensack University Medical Center in New Jersey, who points to the breathing component of yoga-especially Pranayama (breathing exercises typically performed while seated or supine)-as the key ingredient.

"These are exciting results," said Dr. Mitrani. Although yoga didn't cure atrial fibrillation, he added, it did cut the number of "a-fib" episodes experienced