How Kidney Disease Can Hurt Your Blood Vessels

When Richard", a 66-year-old retired engineer from New Jersey, was recently screened for kidney disease, he assumed that he was in good health. He had no symptoms, worked out four times a week and had no family history of kidney problems. When test results showed that he had kidney failure (that is, his kidneys were no longer able to perform normal functions, including the removal of waste products), Richard was shocked but relieved that he could begin his treatment immediately to help prevent further damage to his kidneys. What you need to know...

*The patient's last name has not been used to protect his identity.

When your kidneys function properly, they remove excess fluid, waste and minerals from the body. The kidneys manufacture hormones that encourage red blood cell production, strengthen bones and influence blood pressure. When the kidneys fail-a condition sometimes known as end-stage renal disease-you're at increased risk for complications such as anemia, weak bones and nerve damage.

What you may not know: Because chronic kidney disease (CKD)-gradual loss of kidney function-can damage blood vessels and organs, including the heart, it also increases the risk for heart and blood vessel disease.

Troubling trend: CKD is on the rise due in large part to the surge in risk factors for CKD, such as high blood pressure (bypertension) and diabetes, according to a study in The Journal of the American Medical Association. In fact, CKD now affects 26 million Americans-roughly 13% of all American adults, according to the National Kidney Foundation.

CKD is often a silent condition, especially in the early stages. One study found that only 12% of men and 6% of women with CKD had been diagnosed with the disorder.

Latest development: Researchers have linked diets that are high in sodium and artificially sweetened beverages to declines in kidney function.

If kidney failure goes undetected, it usually progresses, causing uremia, a group of symptoms that result from impurities in the blood that accumulate because of the kidneys' inability to excrete waste and water. Symptoms of kidney failure for CKD include…

Even if you have no symptoms (such as those described earlier), you should be screened for CKD if you...

The Tests You Need

If you are at increased risk for CKD or have symptoms of kidney failure (as described earlier), ask your doctor to give you screening tests to measure...

Both tests are relatively inexpensive and typically covered by health insurance-the blood tests for creatinine and albumin are $40 to $50 each.

How To Fight CKD

When blood sugar levels rise too high in people with diabetes, the kidneys and other organs often are damaged. For these reasons, one of the best ways to guard against CKD is to avoid high blood pressure and diabetes.

If you are diagnosed with CKD, it's crucial to control the root cause. For example, people with CKD and hypertension need to get their blood pressure below 130/80 millimeters of mercury (typically through dietary changes, such as limiting sodium intake, and blood pressure-lowering medication).

People with CKD and diabetes need to get their hemoglobin A1C level—the average blood glucose level over three months—below 7% (usually through careful attention to diet and the use of diabetes medications). If CKD progresses to end-stage renal disease, a kidney transplant or dialysis, in which machines do the job of your kidneys, is required.

Important: If you have CKD, review all your medications, vitamins and herbs with your doctor. In people with advanced kidney disease, fat-soluble vitamins (such as vitamin A) can accumulate in the body, causing vitamin toxicity. In addition, certain herbal medications, such as those containing aristolochic acid, can be toxic to the kidneys. Certain medications, including the diabetes drug metformin Glucophage), and nonsteroidal anti-inflammatory drugs, such as naproxen (Aleve) and ibuprofen (Motrin), can worsen CKD.

People with CKD also should take precautions when undergoing certain medical tests. For example, dyes used as contrast agents for computed tomography (CT) scans and other procedures can weaken the kidneys. Oral sodium phosphate bowel preparations used for colonoscopies, such as Visicol and Osmo Prep, also can be harmful. If you have CKD, tell your doctor about it before undergoing radiological tests that use contrast agents or taking a sodium phosphate product prior to a colonoscopy.

One-Minute Test that Could Save Your Life

Emergency room (ER) doctors misdiagnose one-third of strokes when the only symptom is dizziness, and patients may wait hours for diagnostic MRIS, delaying treatment.

Study: With a one-minute visual exam that looks for abnormal eye movements, such as jerking, doctors diagnosed all 69 stroke victims among 101 ER patients, while MRIs gave eight false negatives.

Best: Dizzy patients should ask for an eye-movement test.

Little-Known Cause Of Stroke, High Blood Pressure and Aneurysm 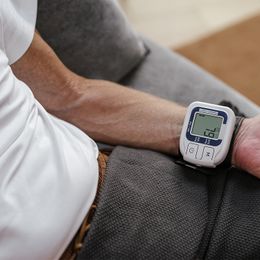