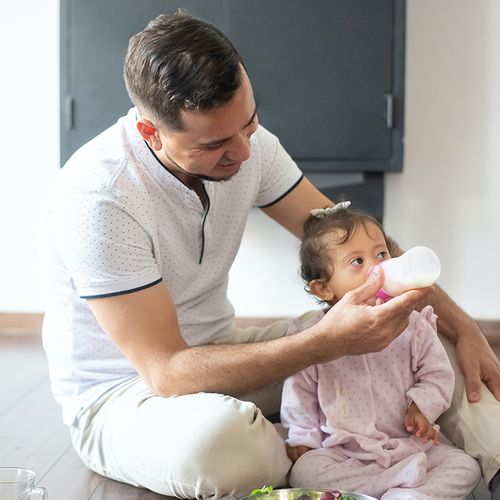 Babies who are still drinking from a bottle at two years of age may be prone to obesity by the time they turn five, a recent study suggests.

For the study, researchers analyzed data on 6,750 children who participated in the Early Childhood Longitudinal Study, Birth Cohort, which included kids from around the United States born in 2001.

About 22% of the children continued to use bottles regularly at 24 months of age, meaning they mainly drank from a bottle or were put to bed with one.

At age 5% , about 23% of the children who drank from a bottle at age two were obese, compared with about 16% of kids who'd stopped using a bottle by age two, according to the study.

That makes children still using a bottle at age two about 33% more likely to be obese than children who were weaned sooner, the researchers said.

The researchers accounted for other factors that could influence obesity in five-year-olds, including having an obese mother, socioeconomic status, whether kids were breast-fed as infants and the timing of the introduction of solid foods. They did not have information on the children's physical activity.)

Even when controlling for those factors, children who drank from a bottle at age two were more likely to be obese than kids who'd graduated to a cup, the researchers said.

Children were considered obese if their body mass index (BMI, a ratio of weight to height) was at or above the 95th percentile for their age. The proportion of five-year-olds in the study who were obese roughly tracked other national statis tics that place obesity rates among preschoolers at about one in five, said study lead author Rachel A. Gooze, MPH, a doctoral candidate in public health at Temple University's Center for Obesity Research and Education in Philadelphia.

The study was published in The Journal of Pediatrics.

One likely explanation for the finding: Kids who are still drinking from a bottle at age two are probably consuming more calories than they need, the study authors said.

"At older ages, the bottle is probably used for comfort and convenience rather than nourishment," said Gooze.

Experts have long encouraged parents to wean children from the bottle around age one.

The American Academy of Pediatric Dentistry advises parents to wean children from a bottle at about ages 12 to 14 months, and to avoid putting a baby to bed with a bottle to avoid tooth decay.

The American Academy of Pediatrics has a similar recommendation, cautioning that "the bottle should) be given up entirely at around age one and almost certainly by 18 months."

Other research has suggested that prolonged bottle use may contribute to iron deficiency, according to background information with the study.

Bottle-feeding or breast-feeding infants is necessary during the first year of life to provide adequate nutrition during a time of rapid growth, said Roya Samuels, MD, a pediatrician at the Steven and Alexandra Cohen Children's Medical Center of New York in New Hyde Park.

Between four and six months of age, babies should begin eating solid foods, which will gradually become the child's main source of nourishment, Dr. Samuels said. A typical one year-old needs only about 10 to 16 ounces of whole milk per day, in addition to a "healthy assortment of table foods," she said. Parents should limit fruit and vegetable juices to no more than 4 ounces a day and the remainder of liquids consumed should be water, she added.

"If parents continue bottle-feeding into the toddler period, it is likely children will be consuming too many calories during the course of the day, leading to excessive weight gain into childhood," Dr. Samuels said, noting that this new study is among the first to track children over time to determine how prolonged bottle use may affect their weight.

Wresting a bottle away from an opinionated and stubborn toddler isn't easy, especially if there is a younger sibling in the house who is getting a bottle.

Gooze recommends that parents discuss weaning strategies with their pediatrician, and also change their own mindset about the transition. Rather than think of weaning as taking something away from the child, look at it as a sign your baby is reaching another milestone, she said.

"We definitely recognize stopping the bottle at a year of age is not easy, and stopping it at two years of age may be even harder," she said.

"It might be helpful to think of moving from a bottle to a cup as a developmental milestone, like moving from crawling to walking, which is something to celebrate, even if it has challenges."

Now Hear This: Can Kids' Ear Trouble Make Them Fat?