Until recently, most people who took good care of their teeth and gums did so to ensure appealing smiles and to perhaps avoid dentures. Now, a significant body of research shows that oral health may play a key role in preventing a wide range of serious health conditions, including heart disease, diabetes, some types of cancer and perhaps even dementia.

Healthy teeth and gums also may improve longevity. Swedish scientists recently tracked 3,273 adults for 16 years and found that those with chronic gum infections were significantly more likely to die before age 50, on average, than were people without gum disease.

What's the connection? Periodontal disease (called gingivitis in mild stages ... and periodontitis when it becomes more severe) is caused mainly by bacteria that accumulate on the teeth and gums. As the body attempts to battle the bacteria, inflammatory molecules are released (as demonstrated by redness and swelling of the gums). Over time, this complex biological response affects the entire body, causing systemic inflammation that promotes the development of many serious diseases. Scientific evidence links poor oral health to...

Diabetes. State University of New York at Buffalo studies and other research show that people with diabetes have an associated risk for periodontitis that is two to three times greater than that of people without diabetes. Conversely, diabetics with periodontal disease generally have poorer control of their blood sugar than diabetics without periodontal disease-a factor that contributes to their having twice the risk of dying of a heart attack and three times the risk of dying of kidney failure.

Heart disease. At least 20 scientific studies have shown links between chronic periodontal disease and an increased risk for heart disease. Most recently, Boston University researchers found that periodontal disease in men younger than age 60 was associated with a twofold increase in angina (chest pain), or nonfatal or fatal heart attack, when compared with men whose teeth and gums are healthy.

Cancer. Chronic gum disease may raise your risk for tongue cancer. State University of New York at Buffalo researchers recently compared men with and without tongue cancer and found that those with cancer had a 65% greater loss of alveolar bone (which supports the teeth)-a common measure of periodontitis. Meanwhile, a Harvard School of Public Health study shows that periodontal disease is associated with a 63% higher risk for pancreatic cancer.

Dementia. When Swedish researchers recently reviewed dental and cognitive records for 638 women, they found that tooth loss (a sign of severe gum disease) was linked to a 30% to 40% increased risk for dementia over a 32-year period, with the highest dementia rates suffered by women who had the fewest teeth at middle age. More research is needed to confirm and explain this link.

Steps to improve your oral health

Even though the rate of gum disease significantly increases with age, it's not inevitable. To promote oral health, brush (twice daily with a soft-bristled brush, using gentle, short strokes starting at a 45-degree angle to the gums) and floss (once daily, using gentle rubbing motions-do not snap against the gums). In addition...

See your dentist at least twice yearly. Ask at every exam, "Do I have gum disease?" This will serve as a gentle reminder to dentists that you want to be carefully screened for the condition. Most mild-to-moderate infections can be treated with a nonsurgical procedure that removes plaque and tartar from tooth pockets and smooths the root surfaces. For more severe periodontal disease, your dentist may refer you to a periodontist (a dentist who specializes in the treatment of gum disease).

Note: Patients with gum disease often need to see a dentist three to four times a year to prevent recurrence of gum disease after the initial treatment.

Good news: Modem techniques to regenerate bone and soft tissue can reverse much of the damage and halt progression of periodontitis, particularly in patients who have lost no more than 30% of the bone to which the teeth are attached.

Boost your calcium intake. Research conducted at the State University of New York at Buffalo has shown that postmenopausal women with osteoporosis typically have more alveolar bone loss and weaker attachments between their teeth and bone, putting them at substantially higher risk for periodontal disease. Other studies have linked low dietary calcium with heightened periodontal risk in both men and women.

Self-defense: Postmenopausal women, and men over age 65, should consume 1,000 mg to 1,200 mg of calcium daily to preserve teeth and bones. Aim for two to three daily servings of dairy products (providing a total of 600 mg of calcium), plus a 600-mg calcium supplement with added vitamin D for maximum absorption.

Helpful: Yogurt may offer an edge over other calcium sources. In a recent Japanese study involving 942 adults, ages 40 to 79, those who ate at least 55 grams (about two ounces) of yogurt daily were 40% less likely to suffer from severe periodontal disease-perhaps because the "friendly" bacteria and calcium in yogurt make a powerful combination against the infection-causing bacteria of dental disease.

Control your weight. Obesity is also associated with periodontitis, probably because fat cells release chemicals that may contribute to inflammatory conditions anywhere in the body, including the gums.

Don't ignore dry mouth. Aging and many medications, including some antidepressants, antihistamines, high blood pressure drugs and steroids, can decrease saliva flow, allowing plaque to build up on teeth and gums. If you're taking a drug that leaves your mouth dry, talk to your doctor about possible alternatives. Prescription artificial saliva products for example, Caphosol or Numoisyn-also can provide some temporary moistening, as can chewing sugarless gum.

Relax. Recent studies reveal a strong link between periodontal disease and stress, depression, anxiety and loneliness. Researchers are focusing on the stress hormone cortisol as a possible culprit-high levels of cortisol may exacerbate the gum and jawbone destruction caused by oral infections.

Sleep. Japanese researchers recently studied 219 factory workers for four years and found that those who slept seven to eight hours nightly suffered significantly less periodontal disease progression than those who slept six hours or less. The scientists speculated that lack of sleep lowers the body's ability to fend off infections. However, more research is needed to confirm the results of this small study. 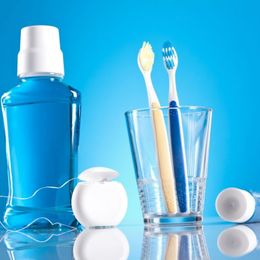 Don't Make These Common Mistakes When Brushing and Flossing