Emergency care in the United States has been given a "C-" grade by the American, College of Emergency Physicians on the first-ever National Report Card on the State of Emergency Medicine.

Their study found that the emergency care system is overcrowded, provides limited access to care, is hampered by soaring liability costs and has a limited ability to deal with public health or terrorist disasters.

Each state and the District of Columbia was graded on a scale of "A' through "F" based on the state's access to emergency care, quality and patient safety, public health and injury prevention and medical liability environment.

Not a single state achieved an overall A. California had the highest ranking, followed by Massachusetts, Connecticut and the District of Columbia-all of which received an overall grade of B. Arkansas, Idaho and Utah received the lowest ranking-a D.

Liability And Costs Are Factors

Dr. Frederick C. Blum, president of the American College of Emergency Physicians and also a professor of emergency medicine, pediatrics and internal medicine at West Virginia University School of Medicine, says that one of the main obstacles to providing quality emergency care is medical liability. In many places, the cost of malpractice insurance has forced doctors, particularly specialists, to give up their practice, he says. This trend is making it more difficult for emergency departments to get specialists to see patients in the emergency room. It also increases the burden on emergency departments, since patients who would have gone to a specialist may go to the emergency department instead, Blum explains.

These problems all have a significant impact on the quality and safety of care being given, Blum says.

To solve some of these problems, Blum believes that both state and federal action is needed, particularly in the areas of liability reform, reimbursement for emergency department visits, disaster and terrorist preparedness and public health education and legislation.

"People tend to count on and take for granted emergency care," Blum says. "But there are a lot of problems that are facing the people who deliver that care."

Dr. Stephen Epstein, an emergency physician at Beth Israel Deaconess Medical Center in Boston, agrees. "It's like musical chairs," he says. "The number of emergency departments is decreasing, while the number of patients is increasing. We are running out of chairs."

Epstein notes that the problem in emergency departments is only a symptom of a larger crisis. "Hospitals have to operate at near 100% capacity in order to survive," he says.

Because of this, many hospitals have closed off areas and have fewer beds available. "A number of us are afraid that if we had a flu pandemic, we would not have places to hospitalize people," Epstein says.

Keep These ER Aids in Your Wallet 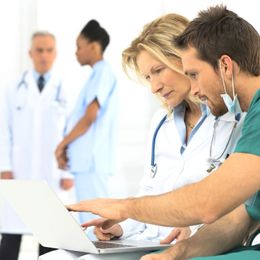